Such a great read!!!

Cracked open this awesome read not too long ago, and these pages pertaining to skin health really stuck out at me.  It further affirms that detoxification and changing your lifestyle to a healthier more nutrient dense one is the only way to go to heal up the gut, internal organs and in turn, the skin.  I’m still in the middle of it, and will follow up with more key points that stood out to me.  This book is such an oldie (published in 1965!) but such a goodie!  Definitely a must read!

Henry Bieler, MD, in his book “Food is Your Best Medicine” said that he always explained to his patients that their pain and illness is the result of their dietary mistakes and intake of drugs.  He said that when the normal chemistry of digestion is upset because of unhealthy living habits, toxins are stagnated in the blood which can impair the filters and eliminative organs, chief of which are the kidneys, liver, bowels, and skin.  He explained that skin problems like eczema is a “terrific attempt” by the body to get rid of toxins since the normal channels of elimination such as the liver are no longer functioning normally.  If the bile poisons in the blood come out through the skin, we get the various irritations of the skin and itching is one of these irritations.  The itching is necessary so the poisons can come out of the skin.  “Thus, the skin is substituting for the liver, or a vicarious elimination is occurring through the skin” (Bieler, pg. 43).

He describes eczema as a hyper secretion of the thyroid gland.  “This gland, located at the base of the neck, controls all functions of the body’s three layers of skin: the outer skin…, the inner skin… and the middle skin.  The normal function of the outer skin is to exhale gases, sweat out water and certain toxic salty substances and oil itself and its hair with special oil glands.  The vicarious elimination, which results from forcefully exuding gases, acid sweat, and toxic oils and greases through the outer skin has supplied names to enough diseases to fill a large dermatology text book.  Chronic eczema, ichthyosis and psoriasis are common examples.  Skin diseases, which are really signs of toxic irritation, respond well to a treatment, dietary and local, directed to the neutralization and elimination of the offending poisons.  This brings the hyperthyroidism under control.” (Bieler, pg. 46).

I love me some beets!  They have this wonderful earthy, naturally sweet flavour.   I use them chopped up raw in my daily salads and sometimes make a little tasty slaw out of them with carrots and onions with a marinade of apple cider vinegar, tahini or avocado and fresh herbs.  I also love to have them sometimes roasted with carrots, potatoes, onions and garlic with dry herbs and baked on parchment to keep it oil free.  It was only until recently that I started using them in my smoothies.  They are super fibrous, so when adding them raw to green drinks, I just put a small amount.  When they are lightly steamed or boiled, they become even sweeter and the consistency is quite smooth.  I love this recipe because it’s so delicious and naturally sweet, you feel like you’re drinking a milkshake for breakfast, but it’s actually healthy for you!

END_OF_DOCUMENT_TOKEN_TO_BE_REPLACED

Healing is not only a physical process, but an emotional and mental one.  If there’s anything that I’ve learned with battling cancer and now pushing through TSW, is the importance of keeping a good, hopeful attitude and having positive thoughts of affirmation.  In dealing with different situations, the way we think and the words we speak into existence can either have a negative or positive effect on our bodies in so many ways…

END_OF_DOCUMENT_TOKEN_TO_BE_REPLACED

There are many caregivers out there on the itsan.org forums sharing there stories, asking for advice and venting along with those who are suffering.  I commend those who can be a stronghold for those going through topical steroid withdrawal.  I know for myself, at the beginning stages of my healing, my mother was my rock who was there for me through all the ups and downs.  She would express to me how helpless she would feel, in knowing that she couldn’t take this pain away from me, or even take on the pain herself.  Through her love and encouragement, as well as the encouragement of my friends and family I kept pushing through, and I’m continuing to push through, no matter how agonizing it can be at times.  A caregiver member on the itsan.org forums expressed so beautifully his side of this illness and portrayed it in a painting.  I would like to share with you all his work Eternal Optimist…

My wife is 3 months into her withdrawals. I feel for everyone who has to go through this.  In honor of my wife and all the countless others who have gone through this and are going through this I did this painting.  It was very therapeutic for me to paint this. 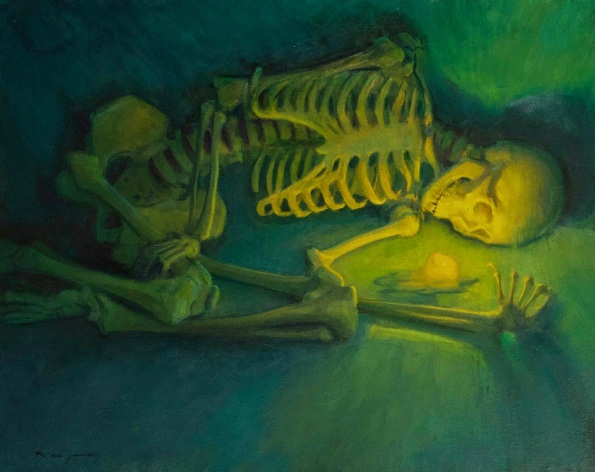 When the one you hold most dear has been in chronic pain with no end in sight, lack of sleep and no sign of lasting help, can’t remember the last time there wasn’t any pain, rational thinking and reason have temporarily been itched away.  Watching and listening to your most beloved moan and cry, with sights and sounds you wouldn’t wish on your worst enemy, claws at your very soul.  When the once most positive, optimistic person you have ever met has lost all hope and has attempted to exit the stage.  Sideline judges speak in shadows out of ignorance and cast reasons why, out of their houses made of glass.  The raw grit of life won’t let you run. Selflessly giving, you are the Eternal Optimist for the other.

I had this ridiculously annoying itchiness going on all around my mouth for most of October.  I noticed the irritation early on as you can see in the first photo (Oct 8th).  It was just red and inflamed, and slowly started to calm down and become super dry.  I was applying coconut oil on it multiple times a day (as well as shea butter) just to ease up the dryness, but it’s like that area just kept drinking it up as quickly as I would apply it.  I thought that I would try a remedy I had done in the past… mixing organic ground turmeric powder with organic virgin coconut oil.  It makes this bright orangey yellow paste and it can be used on dry, scaly skin.  I also used it in the corners of my mouth because I was experiencing cracking as well.  I used this mixture before a few years ago on oozy spots on my foot, but it was too intense for these areas, I’ve learned to keep those open, oozy areas dry so they can heal and scab over… pretty much like “moisture withdrawal” which I’ve found to help with letting the body heal on its own. This mixture is so amazing at healing, the dryness and flaking was gone within a week!  Turmeric and coconut oil are such potent antioxidant, anti-inflammatory, antifungal, antibacterial foods, that they can heal up any skin issue very quickly!  Along with using this paste I would take a break and use just coconut oil.  The mixture did tingle a little bit once I applied it, but subsided rather quickly.  I think it was because the turmeric has such powerful healing properties, and because there were fine cuts underneath the flakes.  I’m experiencing such smoothness around my mouth now, I know I will use this remedy in the future!  Along with doing this mixture, I was regularly oil pulling with the organic virgin coconut oil, which I find really helps to keep the skin on my face pretty clear and flake free. **Cool facts: Turmeric is widely used in Ayurvedic medicine and you can find turmeric face mask remedies to heal acne, eczema, rosacea and to help aid in skin rejuvenation!

I had posted this blog entry into the itsan.org forums and a few people had tried it out and found awesome results!!  This just shows how powerful healing with food can be!

Here are their accounts….

Hi Jen, I just wanted to let you know that I’ve been using turmeric topically on my feet after reading your blog post and wanted to give a big thank you!  The coconut oil wasn’t moisturising enough so I’m melting it into cocoa butter instead and I’m not healed of course but my feet are finally seeing improvement after 8 months!  I’m now seeing turmeric used as body scrub, face masks and all sorts and I’m looking forward to trying it out elsewhere.  I’ve been clear mostly for 5 months now.

Once again Jen, thanks so much!

Hey Jen – Your tip is great!  The backs of my knees were like scary swiss cheese – when you tear open not-yet-healed skin so you have sores within sores, so to speak.  I went one up on your mix and added manuka honey (good for wounds, also highly antibacterial action) to the turmeric & coconut oil paste.  Slathered it on last thing at night, covered with a non-sticky gauze for wounds, wrapped it all with elastic crepe bandage and then used micropore tape to make sure the bandage didn’t shift while sleeping.

2 nights of this mix and the sores are now healed up and flaking.  Skin is pink underneath but not open wounds and not even very raw, which is great for only 2 nights worth of the healing mix….I’d say this is as fast as I’d have gotten with Elomet, which is pretty amazing! (Of course, I probably should have tried the tight wrapping much earlier to avoid scratching at night, so that’s some of it too.)

Thanks Jen,  this is working for me too.

I mixed turmeric with sesame oil, just because it’s an oil I had at hand. I reckon any oil would work. Smeared this on the webbing between my fingers once a day and in two days the skin is no longer broken.

I haven’t needed the cotton wool balls or cloths in the past couple of days. Yeah!